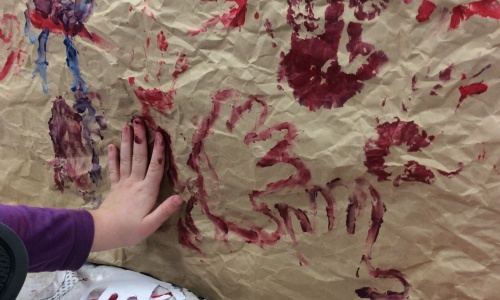 Last term, Year 3's topic was 'Stone Age to Iron Age'. It was a fun and engaging topic that focussed on history and art. The children began by learning about basic survival and how Stone Age people would have prioritised finding food, building shelters, making clothes, finding water and making weapons. They learnt about the importance of historical artefacts, carrying out their own archaeological dig. We learnt how historians have to piece together the evidence they find to create a picture of the past and that this can be very difficult when the artefacts millions of years old!

We looked at 'Lion Man', a 40,000  year old sculpture discovered in a German cave. The children made suggestions about why he was made, how he was made, who made him and what he was used for.  Some children thought that people passed him around the fire when they told stories. Another child though he was a religious statue that people would have prayed to. What do you think he was used for?

The children developed their own sculpture skills and made Lion Man statue replicas. They used techniques such as rolling, pinching, joining and carving to shape the clay. This was harder than you might think!

The children learnt all about timelines, creating timelines of their own lives as well as timelines of Stone Age to Iron Age achievements.  They found out about the smelting process and how Bronze Age and Iron Age weapons were made. We researched Stonehenge and discovered that it took 1,500 years to build. We followed a set of instructions to build our own version in the same order that the original had been built.

The children were fascinated by Stone Age art, particularly the Lascaux caves in France. We used our sketchbooks to practise skills and techniques and to record our ideas, mixing shades of red and brown and making hand print stencils. We then flipped the tables over and covered them with scrunched up paper to make a 'cave' for us to paint our own Stone Age masterpieces.

If you would like to see more photographs of our Stone Age topic, please go to the 'Photo Gallery' tab under 'News & Events'.