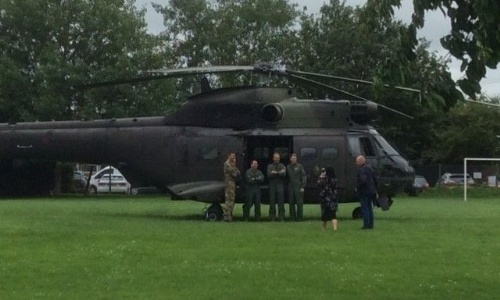 The children were amazed to see a Puma helicopter land in the school field this afternoon!

As part of our Science and Engineering week and our focus on raising aspirations, children at William Hildyard C of E Primary and Nursery School were treated to a surprise visit from the team from RAF Benson in Oxford and their Puma Helicopter landing on the field as part of a training sortie.

All of the children from Nursery to Year 6 were given the opportunity to get up close to the Puma and take a look inside. Our children were totally in awe of the crew members who were fantastic with the children, answering many questions they had about the helicopter and life in the military.

Children in Key Stage 2 then took part in an inspiring careers talk with the crew in the hall, captivating them with their interesting stories and knowledge of their jobs. The children thoroughly enjoyed the personal interaction and it motivated curiosity, leading to many thoughtful questions.

As the pilots and crewman prepared to take off at home time, many families of the school gathered on the playground to watch the Puma depart, waiting with anticipation. A buzz of excitement filled the school grounds as the boys waved goodbye to the children and their families.  Head of School, Mr Fell said, “It has been an awesome afternoon, the children have had the best time. It has been so inspiring for them; this was a once in a lifetime opportunity and they will always remember the day a helicopter landed on their field.”